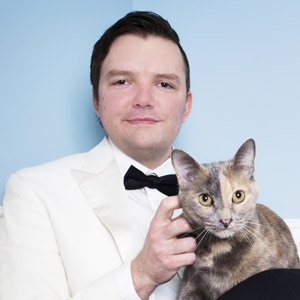 James’s title at Ormewood is Doctor, but if you ask him, he’s a “Dangerologist.” We’re not quite sure what that means, but we do know he’s never dangerous when it comes to the care of our patients. He’s been practicing veterinary medicine since 2015, and his skills in cardiology, along with his interest in medicine, bring an added dimension of care for our patients. So, we’re very glad to have him as part of our team.

Growing up in Georgia, James had the usual pets like cats and dogs, but he was always fascinated with more exotic animals. That fascination persisted even when he moved to Vermont to study philosophy in college. James took a class on exotic animal medicine, and it struck a chord with him. After finishing his undergraduate degree, he enrolled in the UGA College of Veterinary Medicine.

When he’s not at the office, James loves rock climbing, watching movies and generally living life like it’s 2004. James still uses a flip phone (so don’t bother texting him). He prints out MapQuest maps from his computer when he needs directions. And he has never had a single social media account. Needless to say, we were very surprised he let us put his picture on our website.