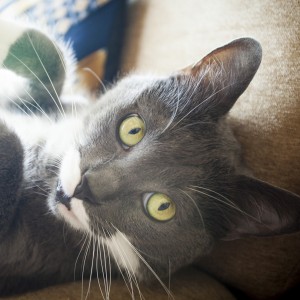 Chunk is the handsome, boss-man cat of Ormewood Animal Hospital — and he knows it. When he’s not sleeping, he’s busy grooming himself. Although, Chunk wasn’t always this vain. It all started after a surgery where he had to have a leg shaved. He liked having bare legs so much that he constantly grooms himself to keep the hair on his legs trimmed back.

Chunk doesn’t just look at himself in a mirror all day. He has several very important jobs around the office. In addition to watching the two parakeets, Chunk is in charge of bossing people around with his piercing eyes and dashing good looks. Just you watch out. One day you’ll be sitting in an exam room, the door will slide open, and in will walk Chunk. Then he’ll stare you out of your chair so he can sit in it.

Don’t let his bossy ways intimidate you, though. He’s really just a big softie. He loves children, he likes licking faces, he will drool at just the thought of food, and around holidays and special occasions, he’ll dress in one of his favorite costumes. So next time you come in, you might see him wearing a tuxedo, lederhosen, or even a pirate costume… Who knows?!