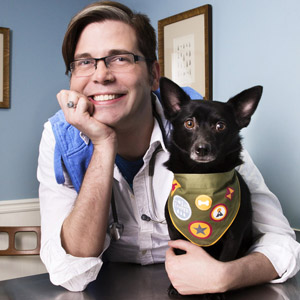 Carl and Dr. Annie have been working together for over 15 years, (and obsessing over Buffy for even longer). After a brief time apart, Carl made his way to us here at Ormewood, and we’re more than happy to have the gang back together.
Growing up, Carl’s love for animals came from his mother. She was always bringing home some sort of creature, whether it was a dog, cat, hamster or gerbil. As a kid, he always wanted to be a whale trainer (until he found out what that really involved). Eventually, a friend convinced him to take a job with her at an animal hospital.
Today, Carl is a licensed Veterinary Technician—although some people refer to him as “The Animal Whisperer.” For some reason, the rowdiest and most unruly of animals absolutely love Carl. So when nobody else can calm a creature down, that’s when Carl steps in. In fact, some of Carl’s favorite duties involve doing the things that others might not find that pleasant—like cleaning teeth. For Carl, it’s rewarding to see those pearly whites when the job is all done.
In his free time, Carl and his friends love dressing up in costumes and going to DragonCon—it’s something they do every year. Carl is a big fan of superheroes, so he’ll sometimes dress up as a male version of his favorite character, Rogue, or he’ll coordinate with his friends and they’ll go as a group of characters. Just don’t expect Carl to show up at work wearing a costume. We all know Chunk is the only one who gets to wear costumes around here.