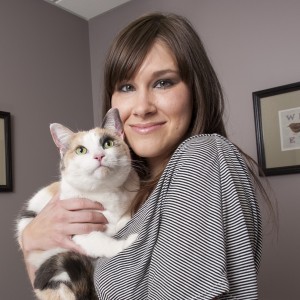 If something goes wrong around the office, the first thing you’ll hear is, “Brittany! Can you come fix this for me?” …It doesn’t matter if it’s a car that won’t start, a computer that won’t connect to the Internet or veterinary equipment that’s on the fritz. Brittany can help fix just about anything — including animals.

After growing up in Pensacola, Florida, and attending the University of West Florida, Brittany decided it was time for a change. In 2007, she moved to Atlanta and started working as a kennel assistant. Two years later she began on-the-job training as a vet tech and joined us at Ormewood in 2010. Brittany helps monitor the animals while they are under our care, assists with anesthesia, and (of course) fixes our office technology.

Thanks to Brittany, quite a few people in the office have taken in squirrels. It all started with Vespa, a squirrel with a nosebleed that Brittany wanted to help. Then came another little guy named Stewart and… well, the rest is squirrel history. Apart from creating a squirrel sanctuary, Brittany would love to have a sanctuary for American bison. She’s obsessed with those kings of the prairie.